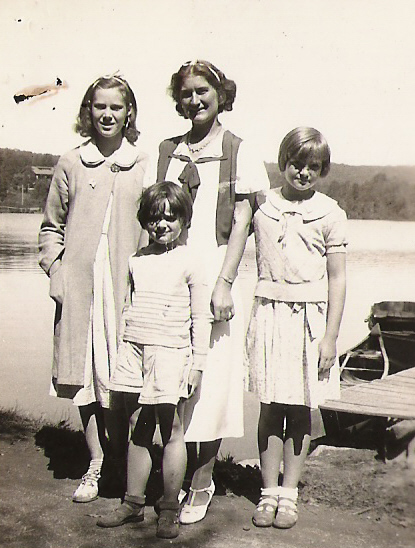 This sweet photo of Mary Mirota (1913-1969) with the Lydecker girls was taken on September 2, 1934, at the Lydecker’s summer cottage at Burnbrae Pond, alongside Morris Lake in Sparta, NJ.  Mary had just turned twenty-one, and she looks poised and beautiful, and dressed so femininely, possibly in her Sunday best. Mary worked for the Lydecker family as a mother’s-helper for most of the 1930s, and she loved these children. They also loved her, and called her “our dearest Meddy,”  in their many cards and letters sent over the years, after they were grown up and had families of their own.

A few years back I was looking at one of the Images of America books by Arcadia Publishing, Middlesex Borough (published in 2003), with my mother-in-law, and I saw a photo of the Lydecker’s other house with the address. It looked so familiar, and then I realized why – it was because our family has photos of that home with Mary and the Lydecker children playing in the front yard. We drove over to see the house, and it looked much the same as it did in the 1930s. Their parents, Chester and Mary Lydecker, owned one of the oldest dwellings, a lovely old white colonial, in Middlesex, Middlesex County, NJ.  Chester Lydecker had been the third mayor of the borough of Middlesex.

Before Chester and Mary Lydecker bought the home in 1932, it had belonged to her parents, Lucius and Bernice Guernsey. They had established an orchard on the property, called the old Sebring Estate. The book on Middlesex solved two mysteries for me – I finally found out the exact address Mary Mirota lived at while she worked for the Lydecker family, and also since I had an old cookbook given to Mary by a Mr. Guernsey, I now understood that connection. Here below is another picture taken of Mary, with children and kittens, in front of the Lydecker home in Middlesex, also taken in the 1930s. 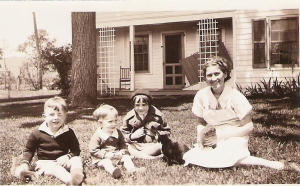 Later after the Lydecker children grew up, Mary enrolled in the Drake Business College in nearby Plainfield, NJ, and completed a secretarial course. She became a private secretary and traveling companion to the formidable dowager,  Mrs. Francis de Lacy Hyde of North Plainfield. This turned out not quite as happy an employment for Mary, since it was said that when Mary left to marry James Doran, she was still owed money from the Hyde family.

One of Mary Mirota’s nephews said of his late aunt, “Aunt Mary was love, unconditional love.” What a wonderful way to be remembered!

11 thoughts on “Photo of the Week – Mary Mirota at Burnbrae Pond, Sparta, NJ”