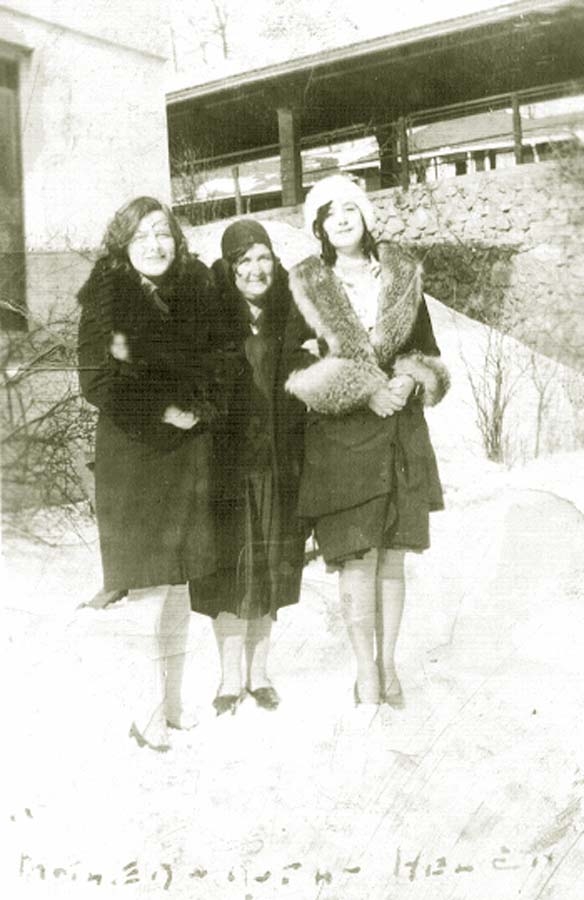 This photograph came from the Rafferty family, and the words “Mother with Ruth and Helen” are written on the bottom.  After some discussion as to who exactly “Mother” was, my sister and I think it is Ellen “Nellie” Doran Pearson (1884-1932). Although the Rafferty family had the picture with their collection, there isn’t enough of a resemblance to Elizabeth Doran Rafferty, Nellie’s sister.  We are very thankful that the Rafferty family has shared photos and research with us.

Finding out about Great-Aunt Nellie Doran from Belfast, Northern Ireland has been filled with many twists and turns. Complicating the search was the fact that my father always used the surname McPearson, for his aunt Nellie, and her husband, Amos Moffet Pearson (1873-1931). My father had very fond memories of his aunt Nellie and his uncle Moffet, especially of going to the Jersey shore with them, but we didn’t have a single photograph of them. Maybe we still don’t and this isn’t Nellie!

I recently listened to a VHS tape that my brothers recorded in 1992 of our father and his sister, Betty, talking family history, to try and find out more clues. They both mention their aunt Nellie as they are being interviewed. The entire taping is a hoot, because everyone is talking at the same time in true Doran fashion! Nellie is remembered by her nephews and nieces as a beautiful, high-spirited, witty woman that liked to sing and dance. It was said that she went back and forth from Ireland to America quite a few times.

We had a good short biography on Nellie written by her niece, Sarah “Sal” Rafferty Mayer, in the 1980s. We also knew that when our grandfather Barney Doran came to Newark, NJ from Belfast in October of 1910, he went to live with his sister, Mrs. Ellen Smith, of Newark, NJ.  In the 1910 Federal Census taken in April, she is listed as Ellen Doran, single, a thread mill worker living at Ogden Street, Newark.  This makes it seem that Nellie married Ed Smith sometime that year, per Sal’s notes, but we haven’t found any record. A search of the 1920 Federal Census turned up Nellie with a different last name. Nellie was listed as Nellie McVeigh, occupation – housekeeper in a private home, and she had been widowed.  Ellen (age 5), was listed as Hellen, along with her sister, Elizabeth (age 8), under McVeigh. They were living with Amos Pearson, a master plumber, who owned his home in Newark, on Winthrop Street.  Amos had two twin  sons listed (age 16), Howard and Robert O.

Looking at the Irish Marriage Records at the Irish Family History Foundation, we found a marriage record for a Nellie Doran to Patrick McVeigh on 26 December 1908 at St. Paul’s Roman Catholic Church in West Belfast, County Antrim. After ordering and viewing the record online, we had a perfect match with our Nellie! When we then found the birth certificate for Nellie’s daughter, Ellen “Helen” from 1914 (at the NJ Archives), we saw that her father was listed as Patrick McVeigh. What had happened to Ed Smith? Perhaps the story that he died while working on the Panama Canal is true.

We then found the marriage record of Nellie and Amos Moffet Pearson, showing that they married on 20 September 1920 at his home on Winthrop Street in Newark. His age was listed as 47, and he was a widower. Nellie was listed as a widow and age 37.  The witnesses were her brother, Bernard Doran, and his wife, Mary.  I’ve found only one reference to Nellie’s daughter, Marguerite Pearson, born in 1922, being called Ruth. Given the fact that Nellie died at the end of 1932, Helen looks the right age to be her daughter. Marguerite was almost eleven when her mother died, so could this be Elizabeth, or maybe a friend or Pearson cousin? This is a family that seemingly enjoyed nicknames, which complicates matters more.

In the 1930 Federal Census, the Pearson family had moved from Newark to the neighboring town of Nutley, also in Essex County.  Amos Pearson was listed as the owner of his house at 57 Union Avenue, age 55, married, first married at age 33, plumber in Essex County.  His wife, Ellen Pearson, has under occupation “none” and was 45, first marriage at age 25, Immigrated 1905, Naturalized Citizen. Their children are listed as: Elizabeth (age 14), Helen (age 16), Margarett (age 8), and Jacob (age 6) all under Pearson.

Their happiness together was short-lived, because Amos Moffett Pearson died at his home on 23 December 1931.  He was buried with his first wife, Carrie Boss Pearson, in the family plot at Evergreen Cemetery, in Basking Ridge, Somerset County, New Jersey. His parents are buried nearby. Sadly, Nellie died just one a year later on 29 December 1933, aged 48 years and one day.  Nellie was buried at the Holy Sepulcher Cemetery, East Orange, NJ. The informant on her death certificate was her daughter, Bessie Pearson.

Of the children of Nellie Doran, only a little is known at this time.  Amos Moffett “Jack” Pearson (called Jacob in the 1930 census), tragically died while a student at Trenton State College in New Jersey on 5 November 1946, of an aneurism. The informant on his death certificate was his half-brother, Howard Pearson. Jack was buried at the Evergreen Cemetery next to his father. The 1947 Trenton State Yearbook was dedicated in honor of his memory (photo from yearbook).  Marguerite married Harold Ruthazer. Helen married a Mr. Michaeli. And Nellie’s first-born daughter, Elizabeth,  never married.

For more on our Doran clan, and sources,  please take a look at our website, also called Genealogy Sisters.