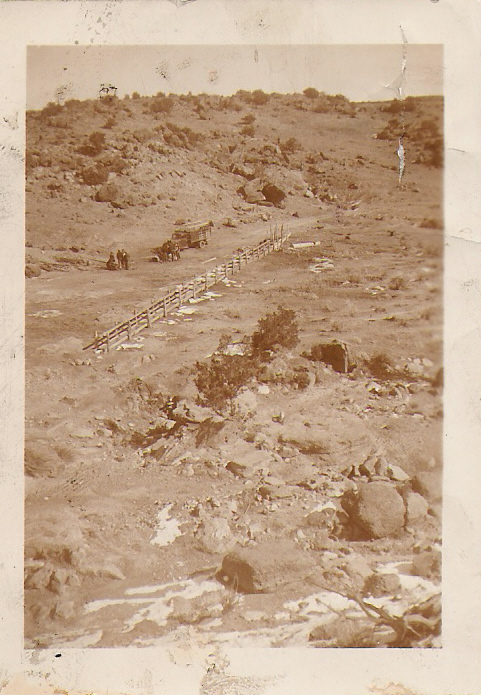 This photograph from the late 1930s belonged to James Doran, and showed one of the Civilian Conservation Corps Camps he had worked at in his youth. He identified it as Camp Gingko, in the Petrified Forest of Washington State. The actual picture is 2.5″ by 3.5″, and on close inspection it shows a truck with two clusters of men, a fence that possibly had been constructed by them, and also the surrounding landscape. I have been researching the camps that the three Doran brothers – Bernard, James, and John, of Harrison, Hudson County, NJ – worked at during the Great Depression. Earlier this year, in March, I posted a photo of John Doran at a camp in Montana. Then, on July 18th, I posted on sending for the records from the National Personnel Records Center in St. Louis, MO of the Doran brothers. Within a month of sending my requests I had the records, and they have been fascinating to read over and to marvel about.

The documents pertaining to CCC enrollee James F. Doran, totaled eighteen pages, and show that he was at Camp Gingko between 15 January 1937 and 8 October 1937 doing park improvements to Camp SP-15. The initials SP stand for State Park, and using the link above it shows that the date the camp was established was 12 April 1936. The nearest Railroad and Post Office were Beverley, the Company number was 3224, and the location was the Gingko Petrified Forest, 9 miles North. What is amazing is that it matches up with the description James had told me to write on the back of the photo in the 1990s!

What is even more amazing is how much I’ve learned from these CCC documents. Taking James Doran’s record, he had enrolled in January of 1937 at Camp Dix, NJ when he was 17 years old, and his home address was 525 Hamilton Street in Harrison. His record showed he was  5’4″ and his weight was 108 pounds. He had gone through the 8th grade, and had graduated from the Lincoln School in 1934. In 1935 he had left Harrison High School after completing his first year. He went right to work for Pete Mahoney (most likely his mother’s brother) as a helper as a trucker in East Newark during 1935 and 1936 and had also worked at Juaspey (not sure of the spelling because of faint type)  in Harrison as a mason’s helper in 1936. Another sheet also showed he had worked as a helper on a coal truck in 1936 for Chemical Charcoal Co., in East Newark.

While in the CCC he also served at Camps SP-12 (unknown), SP-18 (P.O. Bremerton), and NP-5 (National Park in Enumclaw) in Washington State. His date of discharge was 29 March 1939, at Fort Dix, and transportation was furnished to his home in Harrison, NJ. He had served 2 years and 3 months and his height after leaving was three inches higher and his weight was 150lbs! This really made me appreciate the memories he had shared with me of the food served while at the camps. Coming from a family with eight children during the Great Depression he had never had enough to eat. He remembered his mother making up a large pot of soup for most suppers, with whatever she could manage to buy in the way of vegetables, and maybe a soup bone. His first day in Washington State he went to the mess hall and when he saw how much food there was in big bowls he started grabbing every bowl he could find and piled food up on his plate, from bowls of meat and mashed potatoes that were endlessly re-filled by the workers. One finally took him aside and told him, “It’s like this every day – you’ll find this much food tomorrow, and the day after tomorrow, and so on, until the day you leave.” James stayed as long as he was allowed to, and had wonderful memories of his adventure across the country.

What is also very interesting is how many classes James took.  These were a few of the ones listed:  English, Citizenship, Geology, Reading, U.S. Government, Journalism, and Piano. He had become so proficient in piano that his instructor asked if he would want to teach a piano course, and he agreed. His journalism teacher asked if he would write for the camp newspaper. His supervisors remarked that he was an excellent worker, wants to learn, a diligent worker, anxious to get ahead, friendly, industrious and honest. His additional interests were swimming and soccer. His records continue for a short time after he was discharged, because his left index finger had been struck by a shovel of another enrollee while loading a truck at CCC Camp Roosevelt, Snohomish, Washington.  He was discharged from the station hospital at Fort Dix on 5 April 1939, completely recovered, and there was a follow-up record of 15 June 1939. On 13 November 1939 another letter showed James had felt the wound had healed completely, and the case was closed. James had shared with me only happy memories of his time serving in the Civilian Conservation Corps.