This week’s photograph is of Ambrose Mirota, who was born in Pławna, Poland on 16 November 1903. The Polish version of his first name is Ambroży, as seen on the back of the picture. I find his somber gaze mesmerizing, as he looks directly into the camera while his portrait was taken. His large hands hold a document on the table, but the importance of that is unclear. Possibly this was a graduation picture. Very little is know by Genealogy Sisters at this time about Ambrose, except for the fact that he was our first cousin once removed – meaning our great-aunt’s child. This is one more of our brick walls. What is known is that he was born in house number 4 in Pławna, the illegitimate son of Julianne Mirota (24 years old), who was the legitimate daughter of Jacob Mirota and Margaretha Tabis – the daughter of Antonia Tabis. His god-parents were Stanislaus Wautuch and his mother’s sister, Agathe Mirota.  The midwife was Anna Bucko.  The reason that we know this much is because of the excellent research of my sister, and the fact that his baptism was recorded in the LDS microfilm # 2064571. Earlier, I posted a photograph of his mother, Julia Mirota,  and his step-father, Joseph Bozicevic, that was taken sometime around 1913, at Cherry Valley, Washington County, PA.

When I post a photo like this, I hope that someone else will respond that this was their relative. Then one more tangled web of our genealogy will be figured out. So, if anyone has any hints at all, please share them! One day I hope to return to Poland and go to my family’s ancestral villages in south east Poland and do some in depth research. I’ve been to the beautiful city of Krakow, but I didn’t have enough time then to drive the back roads of rural Poland to discover the villages, churches, and cemeteries that may hold clues, or even the chance to find a distant cousin or two. Here is a link to the website Polish Roots that is very helpful for basic information.

When his mother emigrated from Pławna in 1912 to the United States, she put on her arrival papers at Ellis Island that she was going to her brother, Joseph Mirota, in Cherry Valley, PA and that her her next of kin was her mother, Margaretha Mirota. Possibly her son was raised by his grandmother, or other extended family. The back of the photo shows elegant handwriting in Polish that loosely translates, “For the most dear uncle and uncle’s wife, I give you this sacrifice of a picture*.” It was sent to his uncle Jozef Mirota and his wife Zofia Sczerba Mirota in either Cherry Valley, PA or Whitehouse Station, NJ.

*This just in from Kuzny Andre – he has helped Genealogy Sisters with the translation – “The word ofiara can be translated as sacrifice or even victim, but in that precise context it’s a gift so the good translation is ” I offer you that picture or I give you that picture as a gift”.” – Dziękujemy (we thank you)! 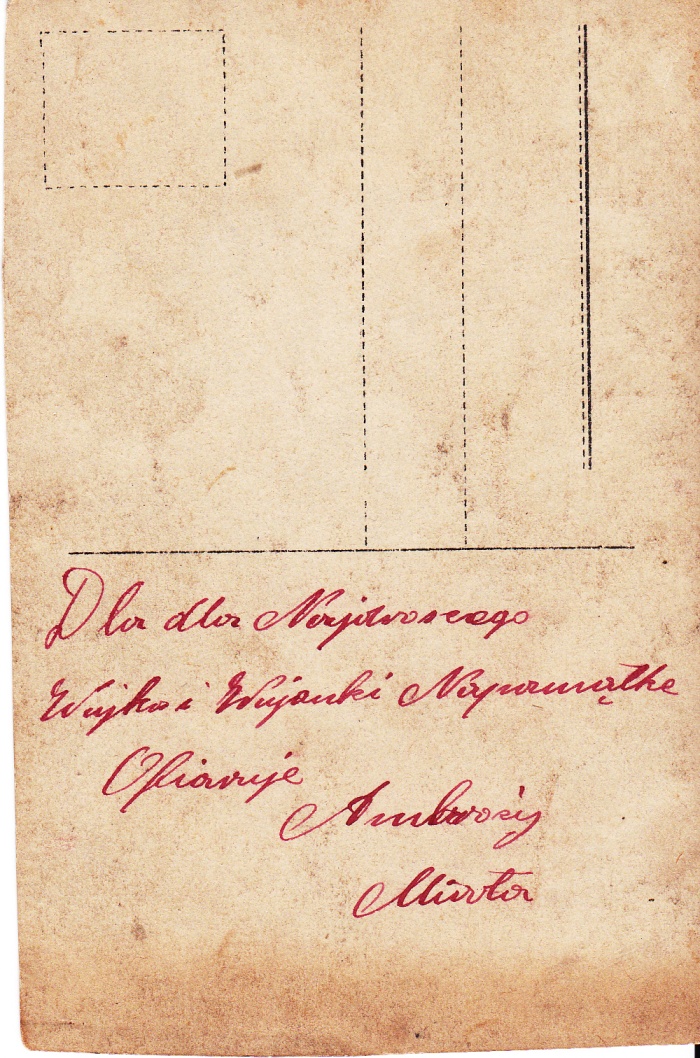