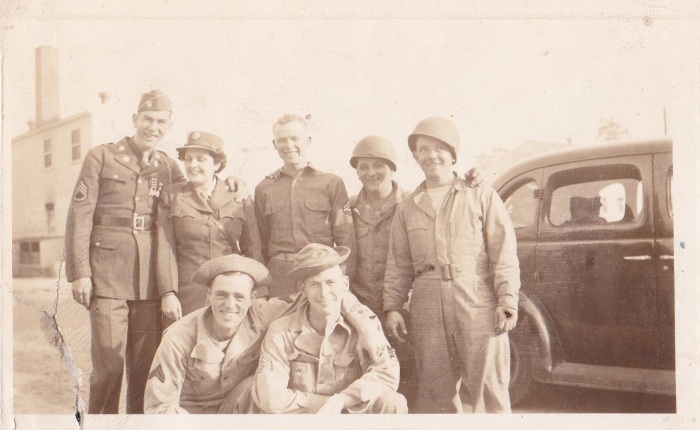 This lovely old photograph was taken in 1943 at Camp Gordon, in Augusta, Georgia, now called Fort Gordon. Jimmy Doran, of Harrison, New Jersey, is squatting in front on the right, with a buddy’s arm thrown over his shoulder, and his hat askew. He was in Company I of the 12th Infantry Regimen, of the 4th “IVY” Infantry Division. I would really like to  know who the rest of his friends were. They all look so happy here, with infectious grins that make me smile along with them.

In June of 1943 Jimmy Doran was on maneuvers in New Jersey and a friend sent this certificate home to his mother. His parents were Bernard and Mary Margaret Mahoney Doran. The friend, Jean Mac Murray, seems very chummy, and she lets “Mom” know that her son will be home soon for a visit.

The large post card was stamped June 21, 1943 from Somers Point, NJ, from Bayshores Cafe. Somers Point is about ten miles from Atlantic City. The 3 cent stamp reads, “Win the War”. One corner was ripped off, possibly by the post office. 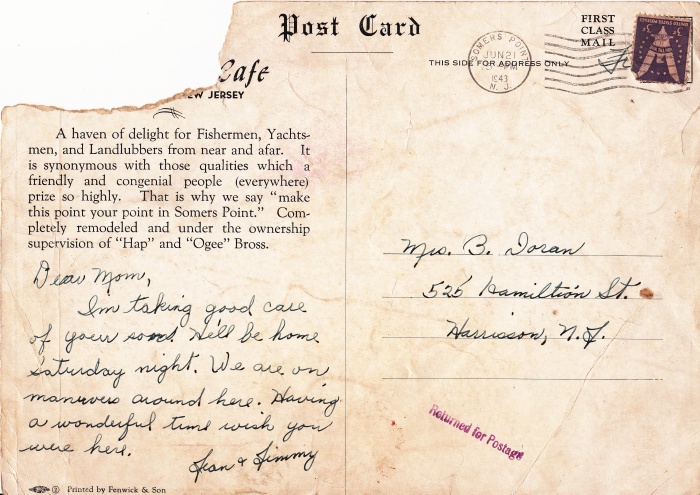 The Regiment, along with the rest of the 4th Infantry Division, arrived in England on 29 January 1944. By the beginning of June in 1944,  the Allied Forces based in England had spent months getting ready for the invasion of France against Nazi Germany troops. On D-Day, 6 June 1944, the 12th Infantry saw its first action of the war when, as part of the 4th Infantry Division, it spearheaded the assault landing on Utah Beach.

Jimmy Doran landed on Utah Beach on D-Day with the third wave at 7 a.m. He earned a Purple Heart after being wounded on the 8th of June in 1944 in France. He made it home from Europe to Harrison, New Jersey on November 18, 1945, after going through the Separation Center at Fort Dix, New Jersey. He was in such a hurry to get home that he refused to stay in line for his other medals, ribbons, and awards.

I always wonder about the stories of Jimmy Doran’s friends shown in the photograph at the top. Did they all survive World War Two? Next week I’m planning on going to see the National D-Day Memorial in Bedford, Virginia, to learn more about the brave men and women that helped win the war, and served on D-Day.

Here’s another photograph belonging to Jimmy Doran from World War Two. I don’t know the names of any of the other servicemen.

Friday’s Faces From the Past is a blogging prompt suggested by Smadar Belkin Gerson through Geneabloggers to help blog about unknown photographs. Here’s a link to her wonderful blog called Past – Present – Future : http://the-past-to-the-present.blogspot.com/