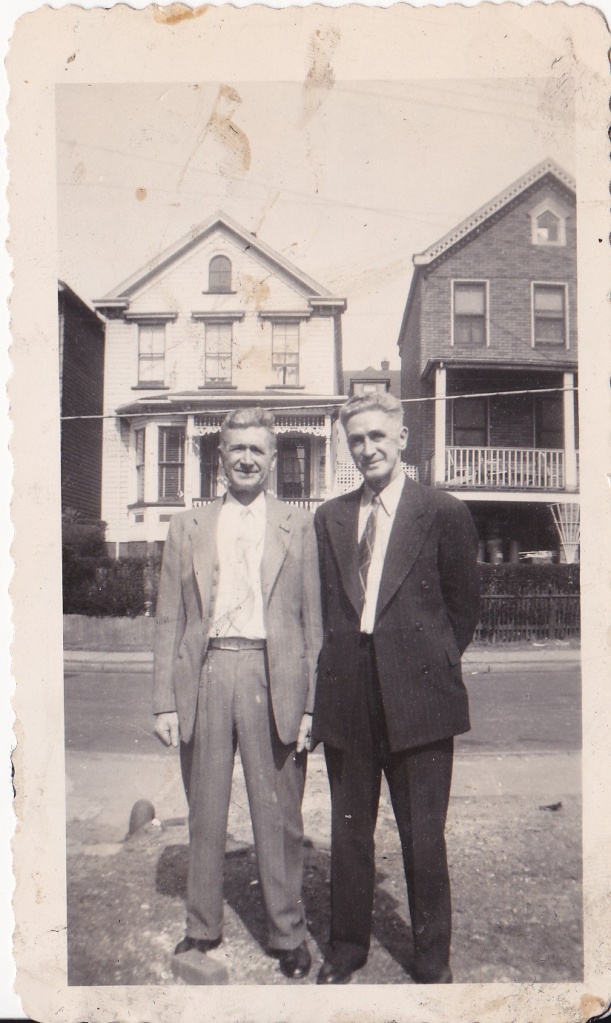 This charming family photograph, from the early 1940s, is of Bernard and William Doran, taken near 525 Hamilton Street, Harrison, New Jersey. I love how they are looking straight into the camera with those smiling Doran eyes, standing shoulder to shoulder. William John Doran (1893-1961) was the younger brother. My grandfather, Bernard Doran (1890-1947), is the one on the left, and he has a slightly pugnacious stance, with his hands balled into fists. It took my husband a few minutes to pick out which of the two brothers was my grandfather. My father definitely took after the Doran side, and not the Mahoney one. When I had looked at this photo with my father in the 1990s, he told me to write on the back, “Bernard and Bill Doran – brothers. Bill lived in Newark, NJ.”

We have a few other photos taken on the same day, one of which I used as my first blog posting, in December of 2011. William and Bernard had another brother, Joseph (1895-1941), and two sisters, Ellen “Nellie” Doran Pearson (1884-1932) and Elizabeth Doran Rafferty (1886-1933), plus at least two siblings that died in infancy. Their mother, Mary Hall Doran, died when the children were young, and her sister Elizabeth “Lizzie” Hall helped to raise the five children. The Doran siblings were all born in West Belfast, County Antrim, North Ireland, and they all ended up living in New Jersey, staying in touch and close all their lives.

The Ulster Historical Foundation, in Belfast, North Ireland had William John Doran’s church Baptism record. His sponsor was his mother’s sister, Elizabeth Hall, with the surname spelled incorrectly as Hull.

Bernard came to New Jersey from Ireland in 1910, going to his sister Nellie’s place on Ogden Street, in Newark. Since my sister and I have blogged before about our grandfather, this posting is mostly about Great-Uncle William Doran. William went to sea from Ireland when he was about fourteen, serving usually as a fireman or boiler operator. Both brothers served in the New Jersey National Guard before World War One. Here is William Doran’s WWI Draft Registration Card (Source – New Jersey Archives, Trenton, NJ):

What caught my sister and my attention when we found this record was that his residence in 1917 was 11 Hamilton Street in Harrison. That’s the same address our grandmother, Mary Mahoney Doran, had listed as her address in 1917 when she married Bernard. Bernard’s address on the marriage application, dated 17 January 1917, was 32 State Street, in Newark, NJ. Mary’s brother, John Mahoney, also listed his address as 11 Hamilton Street for his World War One Draft Registration card in 1917. Maybe the Mahoney and Doran families were close friends.  After my grandparents married, they first moved to John Street in nearby Kearny, until moving to 525 Hamilton Street in Harrison around 1925, coming back to the town that my grandmother had grown up in and loved.

William Doran married Rosina Evans 8 May 1920 in Canning Town, West Ham, Essex County, England. How they met is a mystery. His address was also listed as Canning Town. with his occupation as Ship Greaser. His father was listed as Bernard Doran (deceased) with the occupation as Factory Laborer. Rosina’s father was listed as George Stephen Evans, Electrical Engineer. They were married at the St. Margaret and All Saints Catholic Church in Canning Town. Since both William and Rosina died when I was very young, I don’t have many memories of them, except that she was called Auntie Rose, and very much loved by her nephews and nieces.

Thanks to the Rafferty family, we have another photo of William Doran with his wife, Rosina Evans Doran (1897-1959), and their daughter. We also have this written recollection from Sal Rafferty Mayer, about her father (Tom Rafferty) being a peaceful man that didn’t like to fight, “Whereas, mama’s three brothers (Willie, Barney, & Joe) loved to fight.” The word “loved” is underlined for added emphasis! From family recollections William Doran was a loving and kind man, but all of the Doran siblings knew how to take care of themselves, and not get picked on. They were city kids, growing up in West Belfast and then always choosing to live in cities when they came to the United States. After their marriage, William and Rose Doran lived in Newark, NJ, raising three children. In the 1957 Newark, New Jersey telephone directory he is listed as a station fireman (Source – ancestry.com). William and Rosina Evans Doran are both buried at the Gate of Heaven Roman Catholic Cemetery, East Hanover, Morris County, NJ. 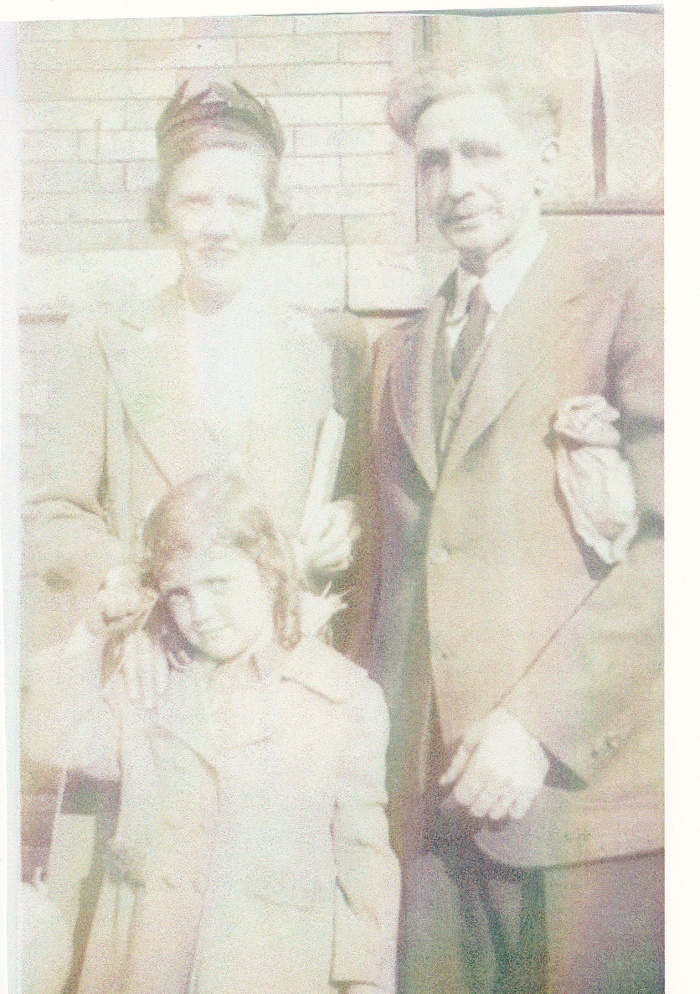 One part of genealogy that always interests me is the neighborhoods that my family lived in over the years. Harrison and Newark in New Jersey are separated by the Passaic River, but many bridges connect the two areas. As a child, in my family, going to the city usually meant a trip to Newark to visit family, and not New York City. We shopped downtown in Newark and watched parades, and sadly often went to funerals. I seem to remember a funeral in Newark, around 1961, where fireman stood on the street with their caps over their hearts as the hearse went by. Although my grandmother, Mary Mahoney Doran, also died in 1961, I don’t think it was her funeral, but instead maybe it was Great-Uncle William Doran’s funeral. Those Places Thursday is a blogging prompt suggested by GeneaBloggers.